We decided it was time to get home and drove the 430 miles needed to get there.

We started the day with sun and clear skies. It clouded over by mid-day and cleared for a sunny drive in Ohio. We didn't make it back before sunset, so we parked and unloaded in the dark.

It's been a wonderful trip. We're anxious to head out again, but not before we let the memories of this trip sink in.

Observations
The employees and volunteers at national and state parks do an outstanding job of teaching and serving the public. Everyone we met was very pleasant and helpful.

We met strangers whom we'd now like to call friends.

Every place we visited was unique ... and the country is full of new sights to experience.
Posted by Dick and Carol at 2:18 PM 1 comment:

We toured the Smoky Mountains today. It was a great, but contrasting, bookend for our trip to the southwest. It was green, cool and crowded.

We drove to Cades Cove and took the 11 mile driving tour first. The scenery and historic sites were outstanding. The tourist congestion was the worst we’ve seen in the past 7 weeks … it looked like hordes of retired people came out to look around.
Cades Cove 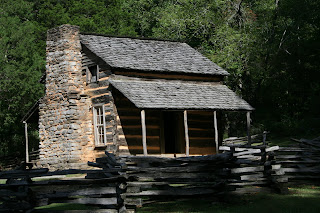 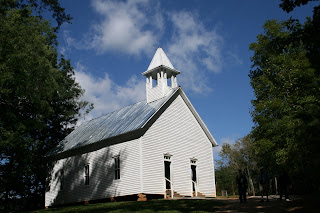 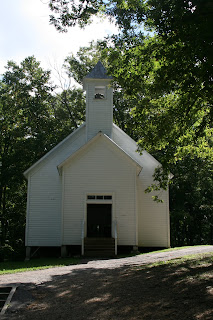 Missionary Baptist Church, built in 1915 ceased to meet during the Civil War because members were mostly Union sympathizers and the Confederates held the upper hand here 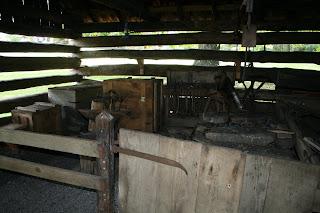 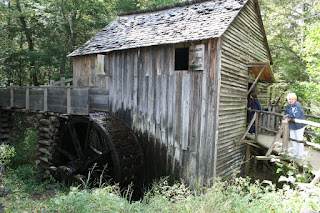 John P. Cable Grist Mill was built about 1870. It was originally a grist mill and a sash sawmill 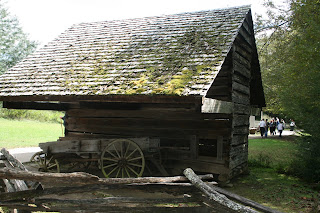 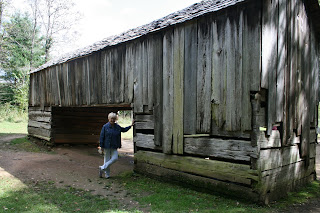 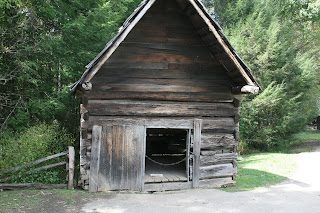 Smoke House (and snake resort ... they warned us not to go inside)
We were tired and hungry after spending 4 hours on the Cades Cove tour. We drove to Gatlinburg for lunch and got a big surprise … we don’t like it. It’s a tourist city with a circus atmosphere and no parking. We’re really grateful for the visitor center worker who suggested on Monday that we stay in Townsend “on the quiet side of the mountain”.
Over the Mountain
We drove over the mountain to Newfound Gap and to Clingmans Dome after leaving Gatlinburg. 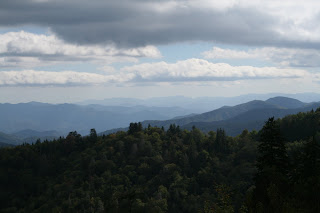 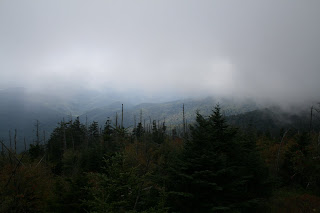 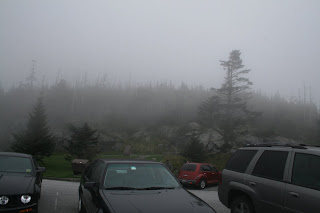 Clouds at the Dome
We headed home through Pigeon Gorge and discovered it’s much like Gatlinburg. The main road was a lot wider, but it tipped the scales on the “circus meter.”
Posted by Dick and Carol at 6:34 PM No comments:

What a difference a day makes! We left a really bad campground this morning, drove 341 miles and ended up in an outstanding park just outside the Great Smoky Mountains National Park.
Our route followed I-40E through Nashville and on toward Knoxville. It’s sunny and clear. The highway temperature has dropped from the 84°F we saw in AR to 73°F. We turned south on US 321 near Lenoir City and took the scenic route to Townsend. Gatlinburg and Pigeon Forge are just a few miles away.
Highlights
Scenery between Nashville and Knoxville was beautiful, lush, green and so very different from what we saw in the southwest. Carol was entranced by the many “brown” highway signs. It seemed that Tennessee offers public park opportunities at nearly every exit. Their rest areas are well maintained and beautifully placed among trees.
Big Meadow Family Campground offers everything missing from last night. We’re parked along a river. It’s peaceful and cool. This is a phenomenal introduction to the beauty of the Smoky Mountains. 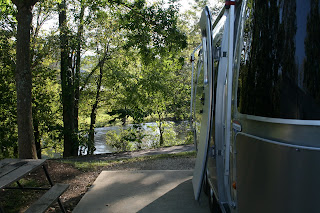 The Little River flows just behind our site 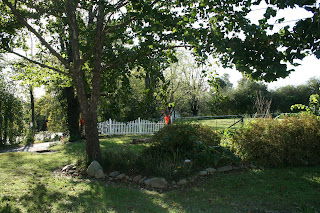 This garden is just to the right of our site

Posted by Dick and Carol at 6:16 PM No comments:

We left Texarkana at 11am today. We had originally planned to connect with Dick's sister in Drasco, AR (north of Little Rock), but that didn't work out. So ... we just changed plans as we drove through Arkansas.

We decided to see the Smokey Mountains before going home to Columbus. After a pretty, 374 mile drive through forested areas in beautiful weather, we ended up stopping in Jackson, TN. It's halfway between Memphis and Nashville, and kind'a out in the boonies.

There are very few campgrounds between Memphis and Nashville. We drove until after dark and finally pulled into Whispering Pines RV Park about 3 miles south of I-40E. This is one of the worst parks we've been in ... power was miss-wired and no rest rooms. Fortunately, we were prepared to operate self-contained and did. We wouldn't be here had we seen it in the light.

Highlights
The day had a few highlights. Unfortunately, one will suggest all we do is eat.

Take exit 183 on I-40E (between Little Rock and Memphis), go south about 3 blocks and you'll find a parking lot on the left jamb packed with cars and semis. You're at Nick's BBQ and Catfish Restaurant. Dick had ribs, Carol had catfish and we shared fried peach pie. Wow! The meal was excellent.

We drove through downtown Memphis at 6pm. It was Sunday evening and the sun was setting. The view of the city and the Mississippi River was very pretty.

Did you know?
Texarkana is the only city in the US where the post office resides in two states and has two zip codes.
Posted by Dick and Carol at 5:28 AM No comments:

We said good-bye to the Stevensons today. They’ll be at the Texas vs. UTEP football game and we’ll both be listening for updates on the OSU vs. Illinois game. 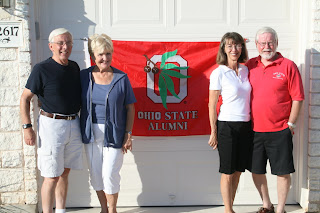 Highlight
We stopped at Collin Street Bakery in Waco, TX on a lark. It was an unexpected treat! We learned it was founded in 1898 and is famous for fruitcake. Their chicken salad sandwich on pecan bread was really delicious. Go north on I-35 and take exit 220A at Waco for great service and fresh baked goods.
Posted by Dick and Carol at 7:12 PM No comments:

The sun returned today. It’s a dandy last day to spend with our friends.

Barbara and Carol went to Carlos 'n Charlie's for a light lunch overlooking Lake Travis. The visiting time was great. The view of the lake was disappointing because of an extended drought. 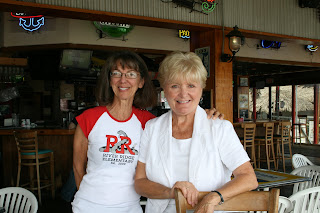 Time out for lunch 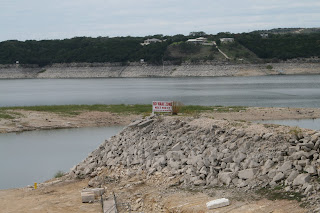 We had the opportunity to meet Barbara's daughter-in-law (Jill) and granddaughters (Cassidy and Kendall) at River Ridge Rattlers cheer leading practice. 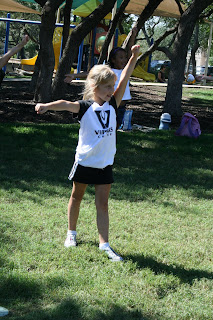 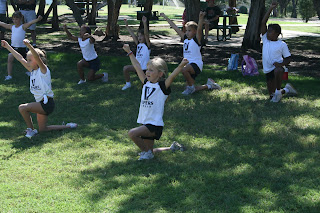 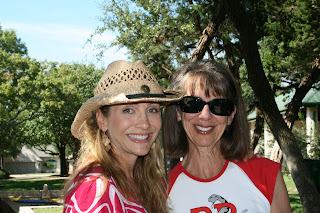 Jill and Barbara enjoy the practice

At Jill's recommendation, Bruce took Dick on a shopping trip to Allens Boot Center for a real leather, hand-tooled, western belt. It was a great suggestion. The search was successful.

We finished the day with a fun dinner at Z' Tejas Southwestern Grill. Everyone decided to experiment by selecting a unique entree. The selections were delicious. As a reward we went home and finished off Barbara's Chocolate Whacky cake. We're obviously a very disciplined group.

Posted by Dick and Carol at 7:11 PM No comments:

We slept late and went to City Market for lunch and some grocery shopping. Their tortilla soup was excellent. The market specializes in offering the unusual … their shopping selection was out of this world. Fruits, vegetables, fish, meat, delicacies, you name it – they have it in wide selections.

Dinner was another Stevenson treat. Bruce prepared shrimp in garlic butter over linguini with asparagus. It was delicious. Barbara added her wonderful Chocolate Whacky Cake with ice cream to the event. Everyone smiled for the rest of the evening. (Note to us: we need to leave here soon or our clothes won’t fit.)
Posted by Dick and Carol at 8:00 AM No comments:

Dick and Carol
We both retired in 2008 and are traveling about the country in a 23' Airstream trailer. We look forward to experiencing many of the sights we've only read about.